The canvassing is finished, and by 10pm this evening, the voting too. The county of Galway is spread over three constituencies, and three counties: Galway West, which includes a slice of south Mayo, Galway East and Galway Roscommon. Galway West is my own constituency – covering the city and its environs as well as Connemara.

For most of its existence, Galway West has voted conservatively (see A brief History below). At the last election in 2016, there was 1 Fianna Fáil, 2 Fine Gael and 2 Independents. One of the independents was the former Progressive Democrat Noel Grealish, and the other, Catherine Connolly , was previously of Labour. So, with all the talk of change in the 2020 election, will the balance of the parties in Galway West be any different than it has been for the last thirty years ?

Figure 1.Polling figures per political parties in Galway West constituency in 2016 and 2019, and distribution of 1st preference votes.

In 2016, the other party with a reasonable chance of success was Sinn Féin (SF). The local poll (commissioned by TG4) put their candidate, Trevor Ó Clochartaigh at 11%, and he got 9 % of the first preferences (which was more than 2 of the candidates that eventually were elected). However, he did not get many transfers in the subsequent counts and was eliminated. The local poll in 2020 (also commissioned by TG4) shows a drop in support for Sinn Féin which contradicts the national polling (which shows a sharp increase in Sinn Féin support). Timing is everything in politics. Sinn Fein have a different candidate now – Mairead Farrell – who was selected after Trevor quit Sinn Féin in 2018. She was a Galway city councillor who lost her seat in last year’s local elections. The TG4 poll was taken before the sharp upswing in Sinn Fein polling numbers – had Trevor remained the candidate, the upward trend would make him a good bet for a seat. Ironically, he now works for TG4.

Unlike in 2016, both the Social Democrats (SD) and the Green Party (GP) are also polling well locally. Niall O’Tuathaill (SD) is polling at 12%, higher than 3 of the incumbents. With a bit of luck on transfers, he should be elected. Pauline O’Reilly (GP) – who was elected to the city council last year –  is on 10%. That puts her in contention too, but it is hard to see more than 2 candidates being elected from the broadly left-leaning cohort of SF, SD, GP and Catherine Connolly, unless there is a dramatic change.

In 2016, Fine Gael and Fianna Fáil got almost the same number of 1st preference votes (~24% each) – that was enough to elect 2 Fine Gael TDs but just one Fianna Fáil. This time, Fine Gael are polling at just 23% (compared to 30% in 2016) and are running just 2 candidates (the incumbents – Hildegarde Naughton and Sean Kyne). Last time, the 3rd FG candidate was Mayo-based John O’Mahoney who probably attracted a lot of non-FG votes due to his location. When he was eliminated, his redistributed votes got the other two elected. FG will struggle to return 2 TDs, and the local poll favours Hildegard (who may also attract transfers from other city-based candidates as they are eliminated).

Fianna Fail are polling at similar levels locally as 2016, and it’s likely that Éamonn Ó Cuív will be the only FF TD returned.  Noel Grealish has largely avoided the media (he skipped both the RTE and Galway Bay FM candidate radio debates) since making controversial racial remarks last year. It is likely that he will also be re-elected – he’s polling at much the same level at in 2016. However, if he loses his seat to  one of the left-leaning candidates mentioned above, it might be a sign that the constituency is becoming less conservative.  It would also signal the end of the Bobby Molloy legacy that began in the 1965 election – back when Sean Lemass – an Easter Rising veteran – was Taoiseach.

It will all come down to preferences – the single-transferable vote throws up many possible permutations. By next week, we will know the outcome. 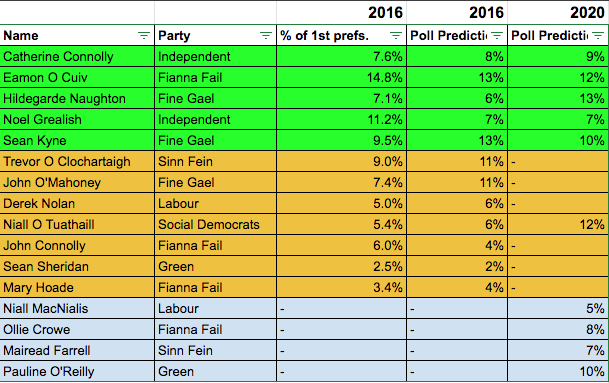 Figure 2. Polling figures for candidates in Galway West constituency in 2016 and 2019, and distribution of 1st preference votes.