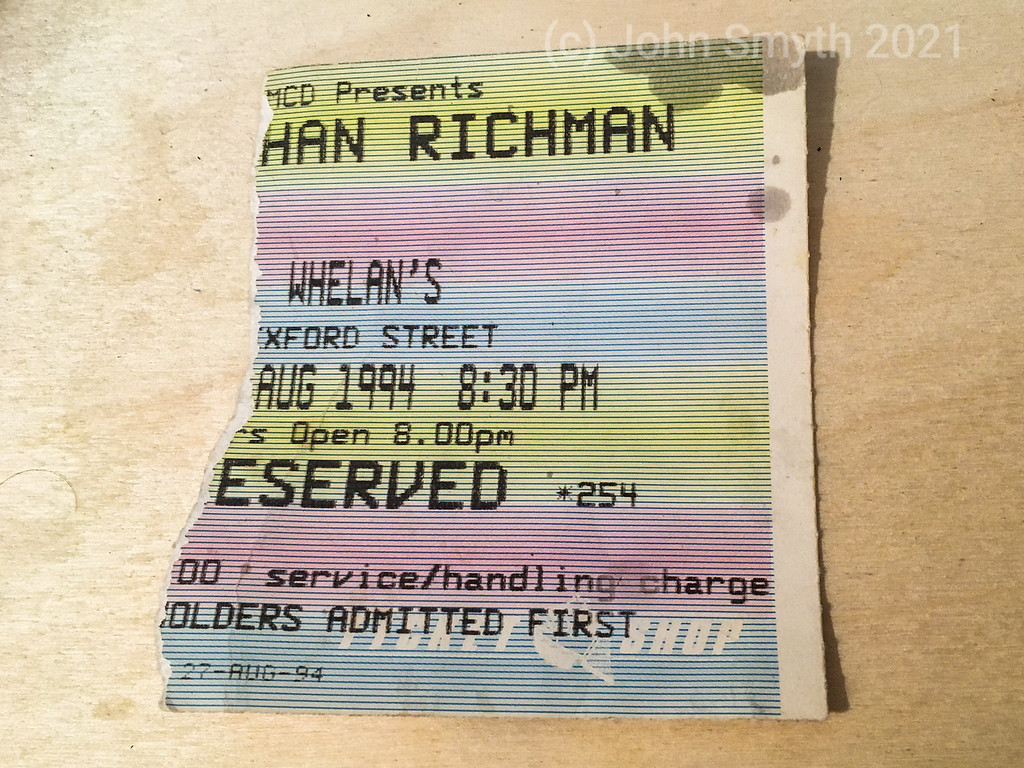 Exactly 27 years ago, I was heading into Whelan’s on Wexford Street in Dublin to see Jonathan Richman play a gig. I didn’t know anything about him – a friend who was a fan persuaded me to go. It was a great gig, though I’d completely forgotten about it¹ until I found the ticket stub in a box of souvenirs at home. I was living in Dublin at the time, and in my memory, it was a good time to live in the city.  I had previously lived in Dublin in 1988, and six years on, there was definitely more of a buzz about the place. The newspapers were full of two stories :- the fallout from the Beef Tribunal² , and the prospect of an IRA ceasefire (which was announced 4 days later, on August 31st). It was a busy year for the then Taoiseach – Albert Reynolds. He had claimed that the findings of the Beef Tribunal³ had vindicated him – a view not shared by other political leaders, including the leader of the Labour Party which was in coalition with Fianna Fail at the time. When another scandal erupted later that year, Reynold’s time as leader of Fianna Fail and Taoiseach was over. Labour went into coalition with Fine Gael, and they governed until 1997, when Bertie Ahern (Albert’s successor) became Taoiseach. Ahern inherited both an improving economy and a developing peace process , leading to both the Good Friday Agreement in 199 and the Celtic Tiger years.

Wikipedia tells me that Jonathan Richman is now 70 which makes me feel very old.

² Fintan O’Toole’s Meanwhile, Back at the Ranch is a great account of the scandal that led to the formation of the Tribunal

³ As it turned out, no politician suffered much discomfort from the Beef Tribunal, and its findings didn’t slow down the progress of Larry Goodman’s business empire much.